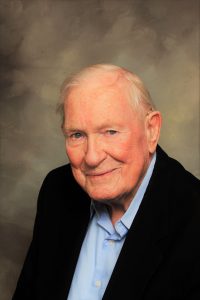 With a voice like a radio announcer and a heart as big as Texas, Don Anderson led the work of The Ecumenical Center for more than 25 years. Born into a minister’s family in Litchfield, Illinois, he became an ordained Baptist minister and licensed psychologist. He served as pastor for churches across Texas before joining The Center where he focused on the work of The Center as a creative force for change in our community. During his tenure, Anderson founded Hospice San Antonio (now Christus HomeCare), collaborated to develop the first ethics committees and consultations in area hospitals and championed community-based pastoral counseling. He served as a clinical professor in the department of psychiatry at the University of Texas Health Science Center, volunteers on local and national boards and travels as a speaker to both religious and medical organizations. In 1996, he was named Humanitarian of the Year by the National Conference of Christians and Jews. He is the author of Better than Blessed, available through The Center.

Join us every fourth Saturday for a no-cost, monthly Open Art Studio session – a wonderful opportunity for people from ages 6 to 106 to use art materials in a playful manner in a relaxed setting.

Get in the GROOVE! Join us at THE CENTER for a no-cost, monthly rhythm making session.

Join us at The Center for a no-cost, monthly Poetry Writing Circle.