Among the many distinguished board members of The Center, there are those with backgrounds so dedicated to service and with stories so inspiring that they embody the very mission of The Center. The lives of Tom and Yona McNish are a perfect example of hope and gratitude conquering adversity to bring new life.

Yona got involved with The Center more than 10 years ago, attracted by our powerful events and healing work in the community. The Center’s veterans services are what compelled Yona to get her husband involved, who immediately recognized the value of our affordable counseling, education and veterans services. 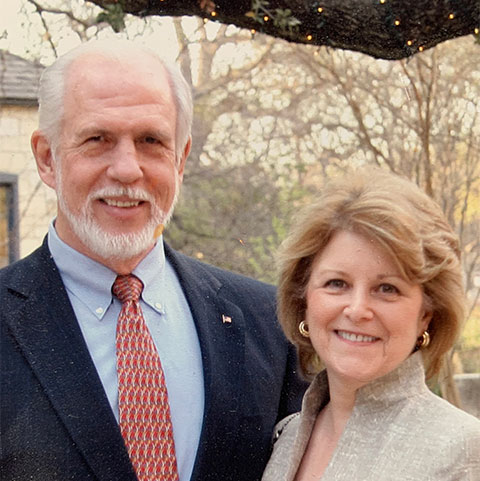 Tom McNish graduated from the U.S. Air Force Academy in 1964 and was shot down near Hanoi, Vietnam in 1966. After six and a half years as a prisoner of war, Tom could have easily given into depression and maladjustment. But instead he saw his return as a rebirth and was grateful for the rare opportunity of a new life. As providence would have it, Tom met Yona just eight days after he returned to freedom and she played a key role in his rebirth. They were married five months later. Tom soon entered medical school with plans to become a Flight Surgeon.

What followed was a brilliant career as a pilot physician, Commander of USAF Hospital Myrtle Beach, Chief of Flight Medicine, and Command Surgeon of the Air Force Reserve at the Pentagon. Just a few of his decorations include three Silver Star citations, the Legion of Merit, and the Distinguished Flying Cross. He also played a key role in the repatriation of POWs from Desert Storm. After retiring from the Air Force as a Colonel in 1994, Tom settled into a second career as a consultant with Biodynamic Research Corporation, where he still works today.

As soon as he learned of The Center’s important counseling and wellness programs, Tom got involved on our Military Liaison Committee and acts as MC for our annual Veterans Celebration. All of The Center’s Veterans events are close to Tom’s heart. The opportunity to honor veterans’ sacrifices and highlight The Center’s many services is a special privilege for him.

“The Center provides vital resources for areas of the community that couldn’t otherwise afford support or counseling. Their extremely dedicated personnel are always there for people in tragic situations.”

We can’t thank Tom and Yona enough for their constant support throughout the years. They truly live The Center’s mission and represent the power of hope and faith to bring healing against great odds. With help from people like them, The Center will continue to find a common center for medicine, psychology, research sciences, business, and faith to help people in holistic ways. You’ll definitely want to meet the McNishes and say thank you at our next event!